10 Korean Cities You Can Visit From Home

South Korea’s travel bubble has yet to officially open to everyone. For the time being, South Korea only started its first travel bubble with Saipan in July. With the pandemic situation worsened in the few weeks, it is hard to say when the travel bubble will be opened to the rest of the world.

Why don’t take a sneak peek at 10 Korean cities virtually in the meanwhile? Let’s have a look at the cities you can explore with K-Tour Top 10.

1. Tales of the most famous cities in Korea

Gyeongju and Busan are two of the most beautiful cities in South Korea. Rich in culture, people and also food!

We are sure that many of you have heard of Busan when it comes to traveling outside of Seoul. By the KTX train, Seoul to Busan is only 2 hours and 15 minutes! A fast holiday getaway to enjoy the Haeundae beach. Check out new trendy places like the Bay101 Yacht Club, Marine City, etc.

Gyeongju is one city where most Koreans have been during their elementary or high school field trips! The historical beauty is known as the museum without walls, Full of historical, architectural sites, and heritage. Learn about Korean History through Gyeongju and its four UNESCO World Heritage Sites and 31 National Treasures!

2. Through the eyes of a foreign local

Incheon and Jeonju are both known for their historical pasts that are still standing today.

Want a day trip out of Seoul? Incheon is the place for you. Known for its architecture during the Japanese colonial period and Chinese-style architecture back in the days of market trades. Incheon is also home to the largest Chinatown in Korea, find out where locals get their Jajjangmyeon (a Chinese-style Korean noodle dish).

Designated as a slow city back in 2010, Jeonju is full of Korean traditions and cultures. Jeonju has a total of 735 traditional Korean Hanok houses. Love historical dramas or BTS, their Summer Package Photobook was filmed in Jeonju! Definitely, a must-watch if you are a BTS army.

Discover Yeosu and Mungyeong between the sea and mountains of South Korea.

Yeosu is one of Korea’s most picturesque port cities, especially at night. Have you guys heard of the song Yeosu Night Sea by the Korean Band Busker Busker? The city is so beautiful at night that it deserves a K-pop song! Observe the southern coastal line through a cable car ride.

Mungyeong Saejae is one of the major mountains in South Korea. If you have watched the Korean Netflix Drama “Kingdom”, we are sure many of you would be familiar with Mungyeong. They have also recreated the Sangju Fortress and Gwanghwamun gate. Watch where the Korean Zombies tried to charge into the Kingdom.

4. Showing you Korea in the small cities

Gangneung and Danyang are well known for their beautiful suns around South Korea.

Want to watch the most beautiful sunrise in Korea? Most Koreans celebrate the first sunrise of the year at Gangneung. It is so popular that Gangneung has its very own “New Year Sunrise Festivals”. Also be on the lookout for BTS “You Never Walk Alone” Album Cover, the BTS Bus Stop.

The name of the city “Danyang” means the Cinnabar Sun. In Danyang, you can experience the beautiful sun surrounded by mountains, where the sunsets over the hills and the river. Not only is Danyang famous for its sun, but it is also famous for its many garlic-style foods. Check out all the garlic foods like garlic dumplings, garlic beef patty, garlic rice, etc.

5. The Journey to the unexpected times and places

Want to relax and heal in Korea? Damyang and Buyeo are the places for you to release stress and recover.

Damyang is known for its natural trails and the largest bamboo forest in Korea. A popular place among Koreans when they want to take a break from their busy life. Take a break at the Sosaewon Garden, a traditional Korean-style garden from the Joseon Dynasty.

Buyeo was known as Sabi during the three kingdoms period, where King Seong moved to rebuild his kingdom. Experience a slow-paced life in Buyeo. A tranquil atmospheric city filled with national treasures. Watch how Buyeo is also slowly transforming its Gyu-am Village into a trendy village filled with small boutiques, cafes, and museums. 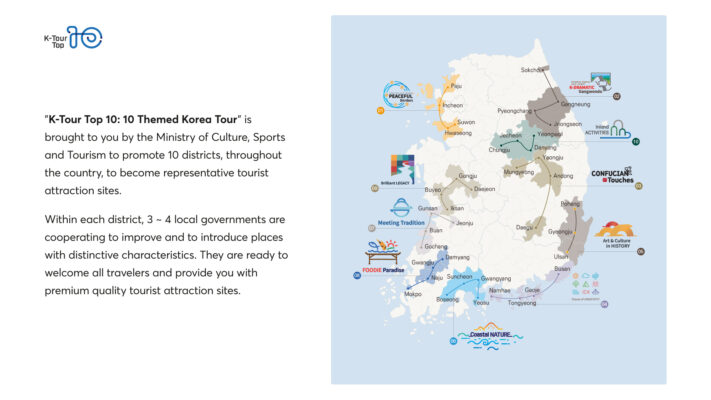 The K-Tour Top10 Live Streaming Tour will be on till November 2021, so be sure to check them out!