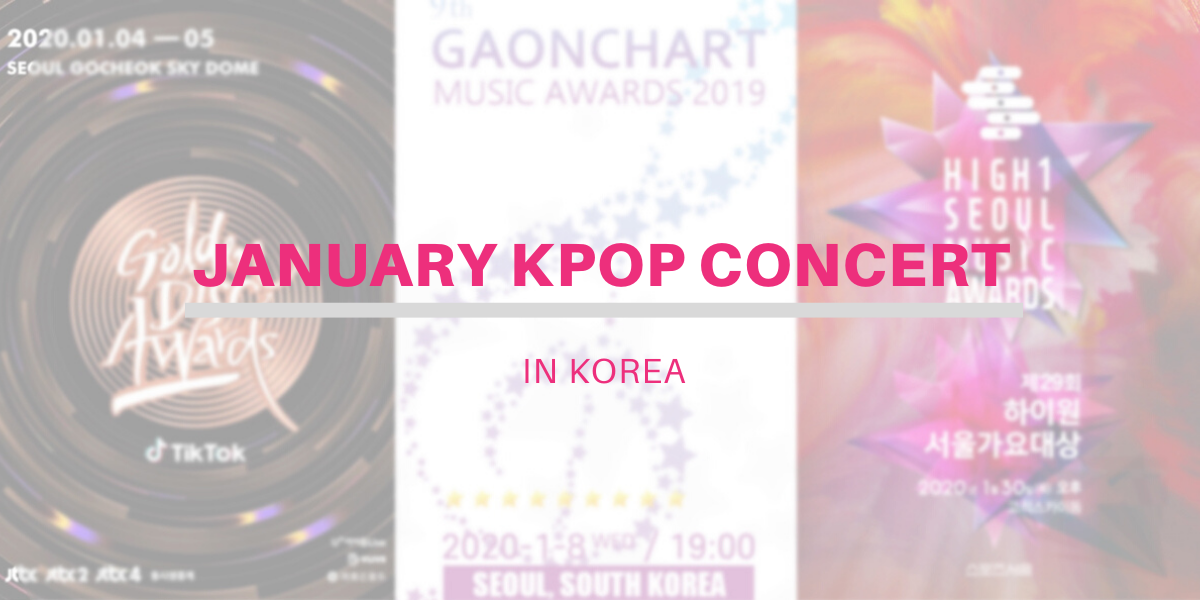 In this post you will see all the KPOP events that will be held on January 2020. Will you be in Korea for this month? this is the opportunity you have to meet all your favorites artist in just one place. January is knew as the month of KPOP in Korea, do not miss the opportunity to see your KPOP artist performing in Home 💜 This is a experience you will never forget.

Do not forget to book you tickets at KoreaTravelEasy.com where you will find out the best prices and the best seats only reserved for foreigners.Are you ready to enjoy KPOP concert from first sections with the best view ever? 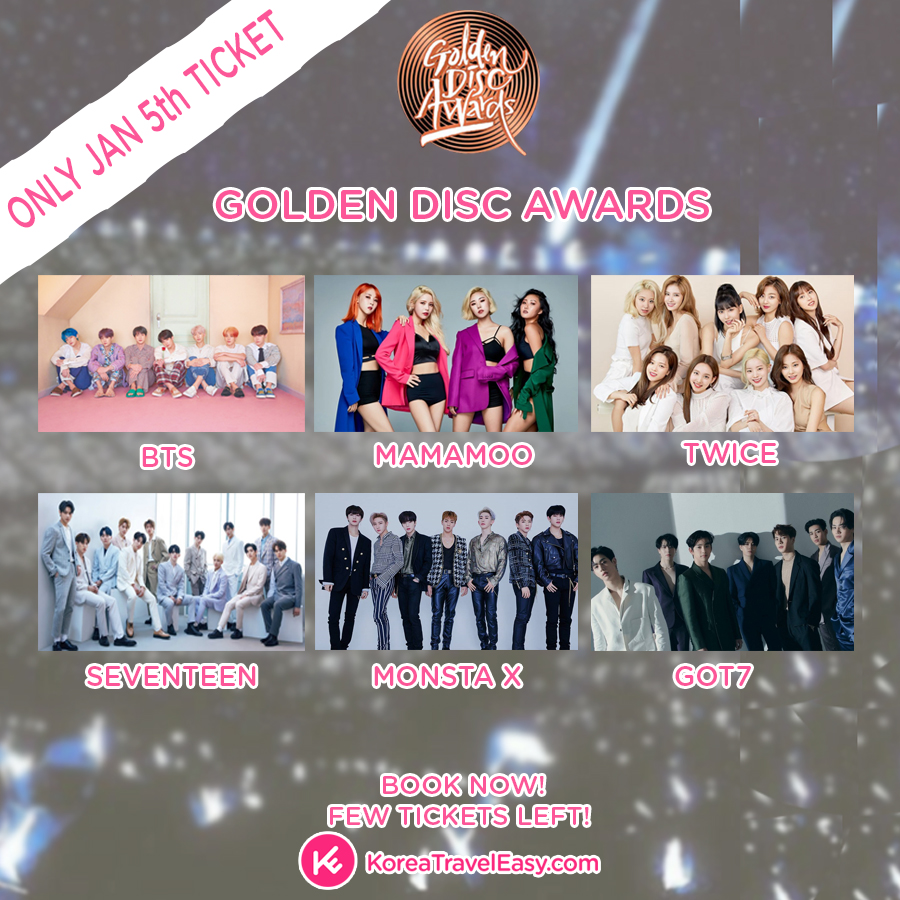 The Golden Disc Awards is a music awards show that is presented annually by the Music Industry Association of Korea for outstanding achievements in the music industry.  Also known as the Korean Grammy Awards, it is considered to be the most prestigious and largest music awards ceremony in Korea!  It’s one of the most important events in the year for K-pop music industry and is also well-known for its fair evaluation of album sales as well as digital music downloads. Throughout the Golden Disc Awards long history since 1986, some of the awards ceremonies were taken place overseas responding to the staggering popularity of K-pop. The 34th Golden Disc Awards will be held on January 4th and 5th, 2020 at the Gocheok Sky Dome in Seoul. You can book here your ticket directly here in our KoreaTravelEasy webpage! 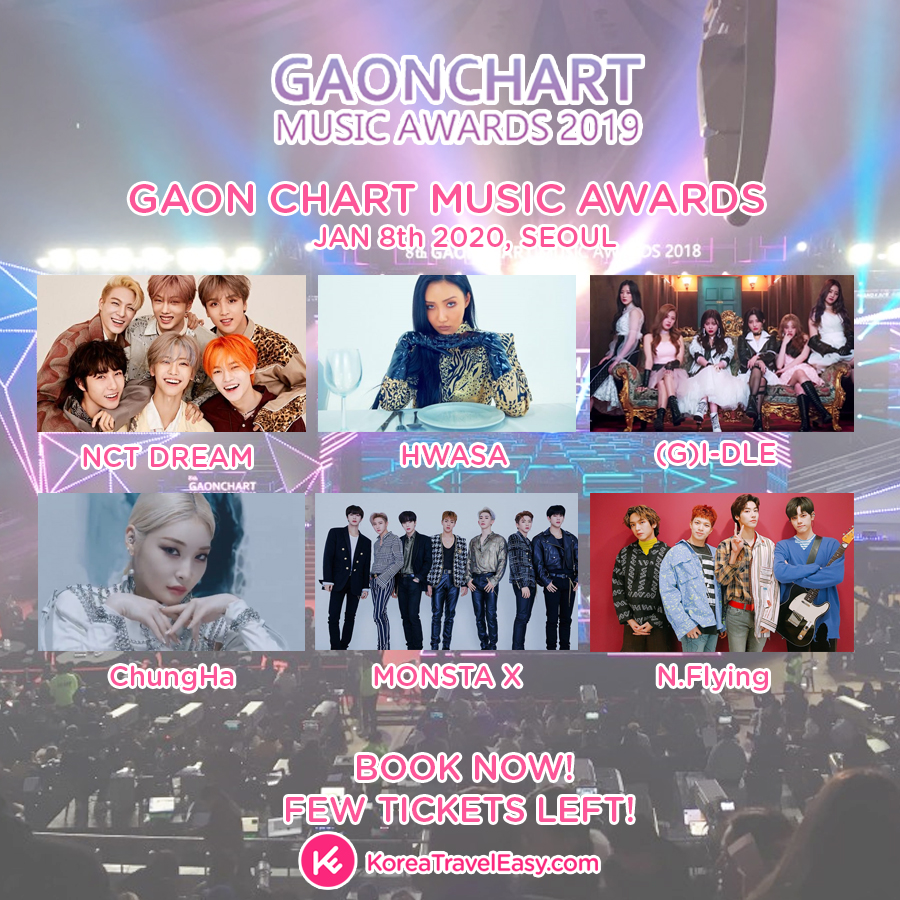 The awards focus more on songs and albums rather than musicians. Award finalists are based on the previous year’s Gaon year-end chart performance according to data for sales of songs and albums! This Gaon Chart Music Awards year’s Line up is: (G)I-DLE, ITZY, NCT DREAM, MONSTA X, Ben, Bolbalgan4, N.Flying, Jang HyeJin, ChungHa, Kassy, TaeYeon, MAMAMOO’s HwaSa. The 2020’s Gaon Chart awards will be held on January 8th at Jamsil indor Arena in Seoul. You can book here your ticket directly here in our KoreaTravelEasy webpage! 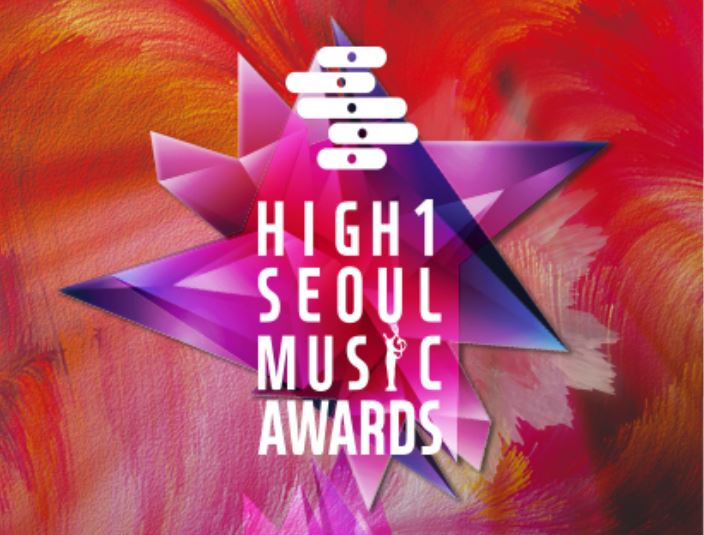 The Seoul Music Awards (서울가요대상) is an awards show which was founded in 1990 and presented annually for outstanding achievements in the music industry in South Korea. The awards winners are selected from singers who have released albums during the year, which are combined with 20% mobile-phone votes, 10% Sports Seoul’s popularity poll, 40% digital downloads, and album sales, and 30%  judges’ scores. There are eight awards that are not restricted by genre, and three awards which are each in trot, hip hop, R&B. It is considered to be one of the most prestigious and largest music awards ceremonies in Korea! The Seoul Music Awards awards will be held on January 30th at Gocheok Skydome in Seoul. You can book here your ticket directly here in our KoreaTravelEasy webpage!

If you have any questions about this tour, please contact us! 😍