A Look Into The World’s Only Divided Country & Visiting The Most Dangerous Border, DMZ

June is a very important day in Korean history. Otherwise known as 6.25 (Six-two-five) by Koreans, this is the very day where the Korean War started and it is a day that is still very much remembered in Korea.

This week we will take the opportunity to learn more about history of the two Korea’s by going on a half-day trip to the DMZ (DeMilitarized Zone).

Even though the events that led to the existence of the DMZ are very solemn, the DMZ from the South Korean side is only around 1.5 hours away from Seoul city hall (pick up point) and visitors can easily visit the DMZ every day except for Mondays. Although it stands for the “demilitarized zone,” the DMZ is actually the most militarized border in the world! How Did The Two Koreas Separate?

Korea became the colony of the Japanese Empire in 1910 and was under Japanese occupation until the end of World war II, When Japan surrendered in August 1945, the 38th parallel was established as the boundary between Soviet and American occupation that  divides the Korean Peninsular roughly in the middle. In 1948, this parallel became the boundary between the Soviet-backed Democratic People’s Republic of Korea (North Korea) to the north and the pro-Western Republic of Korea to the south (South Korea) How to Visit The DMZ?

The DMZ that tourists are allowed to visit is located in the region of Paju, around 1.5 hours from Seoul and it has been off limits of normal civilians entry for more than 60 years, you can only join organized group tours to visit as we mentioned above it has heavy military presence. But don’t worry it’s very safe and much visited by tourists who want to visit this interesting place.

? Did You Know: Endangered Wildlife Lives in DMZ!

DMZ is a great destination for wildlife. This is because of the clean Imjingang River, wetlands, and nature are very well-preserved with a variety of plants and animals. There are many endangered species like the otters, yellow snakes, seals, and wildcats, etc…  able to see in the DMZ.

Here’s something interesting: Since the armistice, it wasn’t until 2009 when the first civilian photographer could enter the DMZ, according to National Geographic. However recently, there has been a documentary featuring famous Hallyu actor Lee Min Ho called “DMZ The Wild”. In the show, Lee Min Ho shows us inside the untouched land that has allowed wildlife to flourish for more than 60 years! Lee Min Ho filmed the MBC documentary as a volunteer (no pay) to raise awareness on the endangered wildlife animals in DMZ. Since not anyone can go inside the DMZ, this makes Lee Min Ho’s documentary valuable.

If you are interested, you can see a trailer here!

You can choose to join the Morning or afternoon tour that takes you see the main sites and most importantly, there is a professional guide who speaks English and is very knowledgeable in the DMZ and the Korean history. The tour will take you following the course but the highlights of the tour is definitely: The 3rd Infiltration Tunnel, Dora Observatory & The Dorasan Station.

See more about the product here: 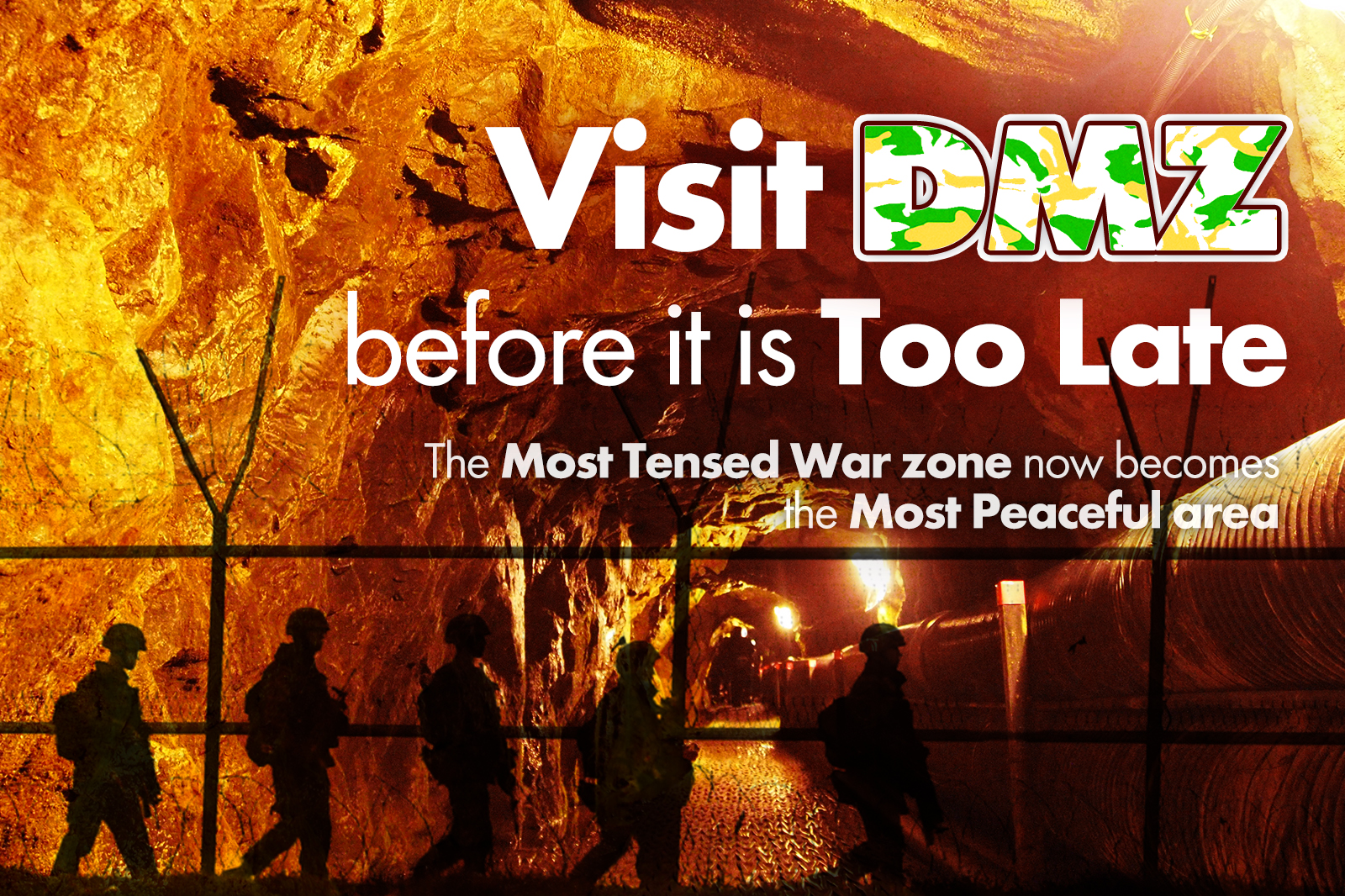 After around 1 hour and 15 mins of car ride , we arrive at the Imjingak Park,  this is first stop before entering the DMZ for a place to go to the bathrooms and get some snacks. The Imjingak  is located 7 km from the Military Demarcation Line was built in 1972 with the hope that someday unification would be possible. On the tour there isn’t much time to browse the place but we could still see that it is a nice park with various relics and monuments of war. At Imjingak, there is also an observatory to overlook the DMZ . There are some tanks on display that were used during the war. In front of Imjingak is the Gyeongui Train Line which was destroyed during the Korean War in 1950. We pass through this bridge after the ID check – make sure you bring your passport because you will not be allowed to go into the DMZ without a passport. Also we were told photos are not allowed when the soldiers are checking the passports on the bus ! The hall had a lot of information for us to to understand easily how Korea got divided. This is a model plan to show the DMZ area and the line that separates the North from South ( the red line).

The highlight of the DMZ tour is to explore and go in a tunnel dug by North Korea to attack. Since 1974, There are actually 4 tunnels  discovered underground now, dug by North Koreans, crossing the MDL (Military Demarcation Line). The tunnels are believed to have been planned as a military invasion or infiltration route. After hearing about the stories of the tunnels. We get to go in the 3rd tunnel since it is closest to the Korean DMZ area.

The 3rd Infiltration tunnel was discovered after a tip received from  a North Korea defector in 1978. The North Koreans dug for 1.6km,  until it penetrated into South Korea 435 m beyond the MDL (Military Demarcation Line). It is more than 70m below the surface, which is more than 25 stories downwards ! It is now blocked by three concrete walls — but it still has enough room to transport 30,000 men per hour !

It is said that even though 4 tunnels are found currently, it is assumed that North Korea has dug many more tunnels yet to be discovered ! 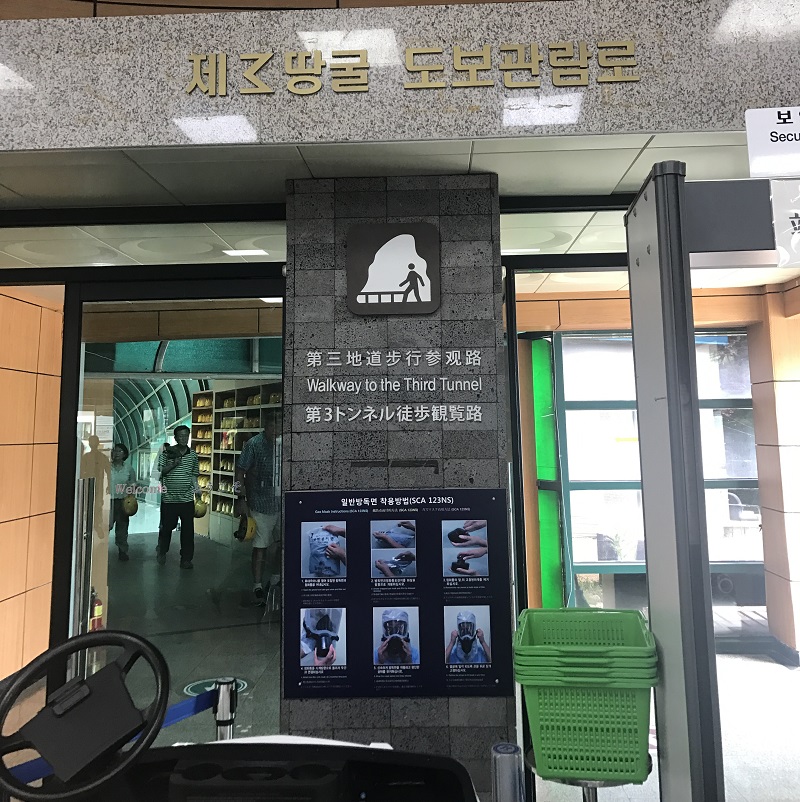 It’s now our turn enter into the actual tunnel!

Before entering the 3rd Infiltration tunnel, it is mandatory to put all your belongings in the lockers: you can only bring a jacket (since it is very cold under 25 floors down!)  and a bottle of water – it is a real work out to walk back up the slope which is around 300m long and 11 degrees slope.

No cameras or cell phones are allowed in the area so you cannot take photos! There are surveillance cameras everywhere since it is a military area so please don’t violate the rules!

Inside the tunnel the ceiling quite low so for your safety you also wear a safety helmet to protect from hitting the ceiling and dripping water. In the tunnel you will spend around 30 minutes and walk up to the 3rd blockage built by the South Koreans after they discovered the tunnel. When you are at that spot we are told that we are only around 175m from the Military Demarcation Line (MDL) to cross to North Korea! Dora Observatory is the closest observation post to North Korea in the DMZ. From the observation platform, North Korean scenery is visible, and so are the outskirts of Gaeseong City, the 3rd largest city of North Korea. Especially, you can view the Gaeseong Industrial Complex operated by both Koreas. However, our guide told us that due to soured relations with North/South Korea, the complex has been shut down since 2016. If you use the binocular (500 won per 2 minutes to use the binoculars there), a statue of Kim Il-sung can be found near the Gaeseong City. The flag poles of both South and North Korea can be seen there.

From the observatory, there’s an interesting story that the tour guide told us. In the 1980s, South Korea built a flagpole in the DMZ area 98.4m high. To respond to that in what some have called the “flagpole war,” the North Korean government responded by building the 160m North Korea flag, only 1.2 km west of the border with South Korea. You can see how competitive North Korea is!

As of 2014, the North Korea flagpole is still the fourth tallest in the world. Dorasan station is the last stop of the tour in the DMZ and it holds great significance for the Koreans even though it’s not a station that is fully in use at all. A sign in the Dorasan station reads, “Not the last station from the South, But the first station toward the North.” For now, it is the northernmost station of South Korea which is only 700m away from the southern boundary of DMZ. Dorasan Station  is only 205km to Pyeongyang and 56km to Seoul. It implies the hope of a future unification. 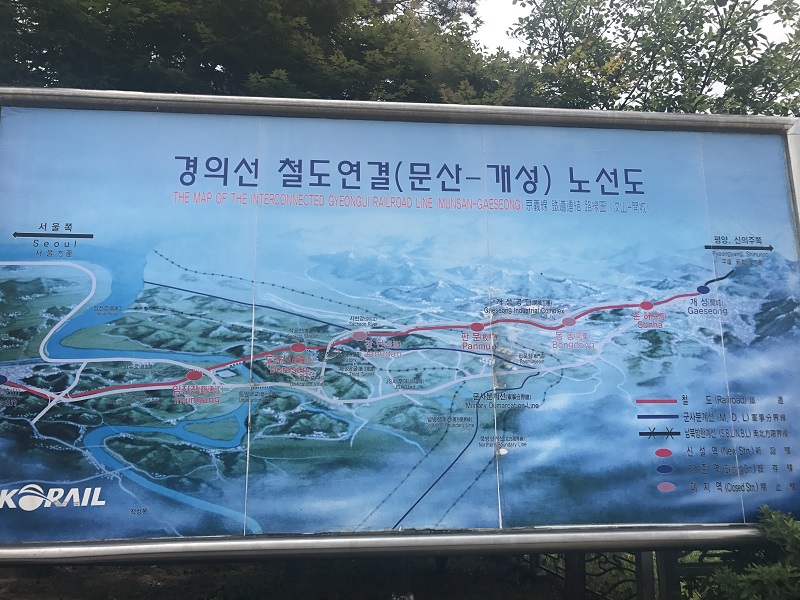 Although the tracks are physically connected, North Korea doesn’t allow trains to pass through, making the expensive station sit unused. There is only 1 train that comes from Seoul daily. Here you can really see that North Korea is really isolated from South Korea even though they are connected by actual land. However, Dorasan station is a symbol and it serves as hope for the reunification of two Koreas. Currently, it’s the last stop, but someday it might take you to Pyeongyang, North Korea’s capital or even to Europe through the Trans-Siberian Railway. 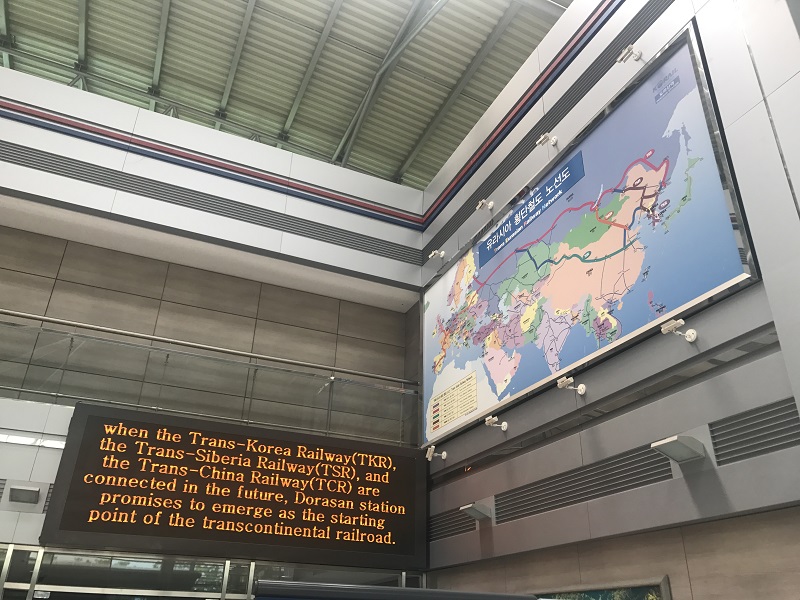 The DMZ tour is a good half day tour to explore when you visit Seoul ! ?

That is all from us for now! We look forward to arranging your group or private trip to DMZ soon!

If you would like to make your own private tour or a customized trip, other itinerary or hire private car, please email us at info@KoreaTravelEasy.com or click the link below!

STEP 1 Write us your request. STEP 2 KoreaTravelEasy designs your custom tour itinerary and sends you the plan. STEP 3 You review and confirm the tour plan after communicating with KoreaTravelEasy STEP 4 You complete the order and payment. Looking to have a one-of-a-kind experience in Korea with a customized trip? Accommodation, tour guide…