Want other activities other than just shopping and touring city? Let’s go out of Seoul! I personally do not like to plan the transportation to the places I go to so day tours are best for me.

This well –planned tour covers three of the most popular attractions near Seoul: Gangchon Rail Park,Nami Island and Garden of Morning Calm all in one day!

The best thing I liked about this tour other than the fact it visits all the places I want to go in 1 day!

This tour meets in Myeongdong station which is very convenient.

Summary of the itinerary:

This is what’s included in the package:

After 1.5 hours of car ride, here we are at Gangchon Rail Park. So you might wonder “what is a rail park? It’s actually biking on a disused rail track using specially designed 2 or 4 – seater rail bikes. In Korea, there are around 10 places for rail biking. Gangchon Rail Park is one that is closest to Seoul is the longest in Korea. This station is the Kim YuJung station which commemorates one of the most famous novelist in Korea. Look at the books that decorate the station! We were 4 in the rail bike we pedaled along old railroad tracks while taking in the lovely Bukhangang River scenery!! Even though it was winter but the snow already melted… otherwise would be much nicer scenery! The ride itself is really fun and it actually does require team work and some pedaling!

After riding this course, you will arrive the transfer station to take a break for 20 minutes (there are small cafeteria and toilet). After break, you will take a Romantic Train for 20 minutes (2.5 km). When we arrived at the the Gangchon Station, our guide was already waiting for us to escort us back to our car to go to the next stop! 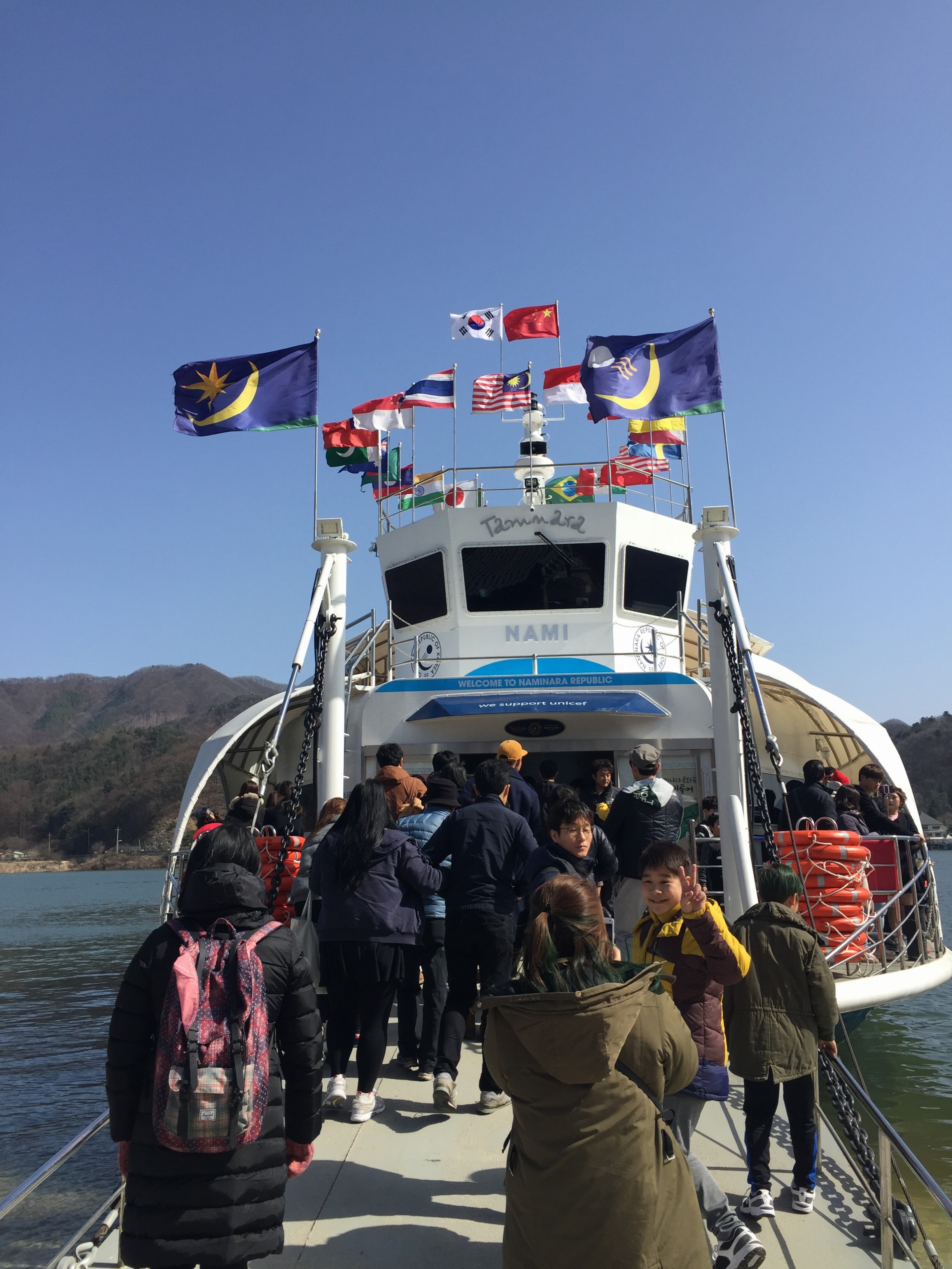 Our next stop, Nami Island, is a tiny half-moon shaped island located in Chuncheon, Its name originated from General Nami who died at the age of 28 after being falsely accused of treason during the reign of King Sejo, the seventh king of the Joseon Dynasty of Korea. It is now a major attraction for tourists and locals, especially after the Korean drama “Winter Sonata” (by Bae Yong Jun and Choi Ji Woo). Nami Island is an oasis close to the bustling city of Seoul. After the 5 minute ferry ride, we meet a forest of trees holding up the sky and open grassy areas with animals to welcome us! Nami island is its own self-governing district we had to pass by an “immigration” and take the ferry there.

3. The Garden of Morning Calm

Finally, the last destination of the tour ~ The Garden of Morning Calm was absolutely stunning! This is the 9th year that the Lighting Garden Festival has been held and it’s only available in winter from early December to mid-march. It might not amaze you when the sky is not dark, but when night came, all the colours of the lights make you feel you’re in a magical world!

We were given ample time (around 1.5 hours) to walk around and enjoy the garden.

It is indeed a long day but it didn’t seem so as the longest car ride was only 1.5 hours and the ride back to Seoul is only 1 hour. Before we know, we arrived back in Myeongdong ! You can comfortably enjoy 3 of the most popular destinations in one day without having to worry about how to take public transportation! BOOK NOW!