Traveling back in the time of the Baekje Kingdom

Travel back in time to the history of Baekje kingdom in Korea and discover the unique cuisine of Gongju city through this 1-day tour. It will definitely be a great weekend trip. Don’t miss the special price!

Discover the ancient capital of Baekje, one of the 3 legendary kingdoms in Korean history

During the Three Kingdoms periods from 57 BC to 668 AD, Korea was divided into three kingdoms of Baekje (백제), Silla (신라) and Goguryeo (고구려). Gongju-si, a city located in South Chungcheong province today was the capital of Baekje kingdom during this time.

Today, Gongju is a major tourist attraction of the South Chungcheong area with many ancient relics and monuments of important historical value. If you are a history enthusiast and want to explore Korean history in particular, join this trip to travel back in the time of the legendary Three Kingdoms! You will also get to participate in an interesting cooking class in the middle of a rural village and experience the local life at a traditional market!

Gongsanseong Fortress was the site of the protective fortress and royal palace built at the time when Gongju was the capital of the  Baekje Kingdom. The West Gate here is considered to be the finest fortress wall that can be seen in Korea. When you walk along with the fortress, you will be able to take in a full view of Gongju city.

Visiting this traditional market, visitors will be able to taste local specialties that are only available in Gongju such as chestnut bread, chestnut makgeolli (rice wine), and chestnut noodles. A night market is held on Friday and Saturday nights, along with various cultural events. 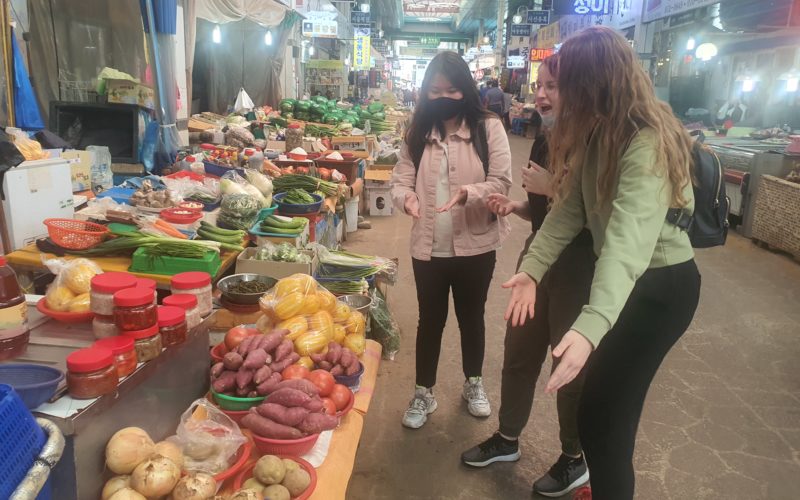 The Royal Tombs in Songsan-ri, or widely known as the Royal Tombs of Baekje, contains representative relics of the Baekje period as well as the graves of the Baekje’s kings. It is believed to contain 10 such graves but to this day, only seven graves have been discovered. The Tomb of King Muryeong, also known as Songsan-ri Tomb No. 7, is the ancient grave of King Muryeong, who ruled the Baekje kingdom from 501 to 523, and his queen. This area is one of Korea ‘s major archaeological discoveries and a crucial source for studying the history of Baekje.